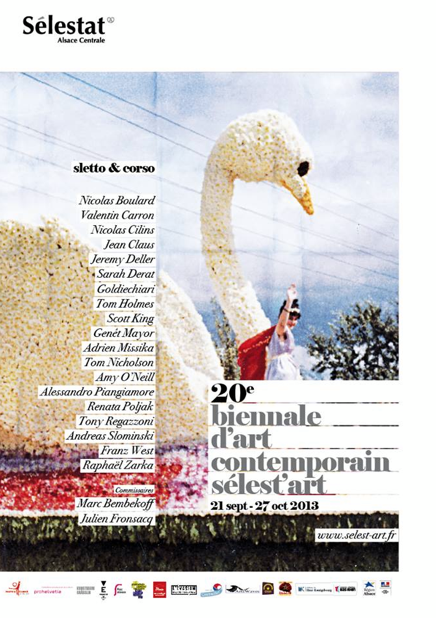 Entitled “Sletto & Corso”, the 20th edition of the Sélestat Biennial of Contemporary Art pays tribute to the Sletto mythical figure and the Corso Fleuri parade. These two significant aspects of the identity of the city of Sélestat allow to explore both the differences and similarities between mythology and folklore, the heritage and the event, the perennial and the transient.

From historical sites to singular spaces, the town of Sélestat and its surroundings offer the ideal circumstances to propose an extended and wide-opened definition of the monument, recalling that there’s some part of festive in the Memorial. Our contemporary context shows some kind of an erosion of the monumental symbolic: its meaning – in the era of globalization and new technologies – may sometimes seem obsolete, but the monument remains not less a spatial and temporal marker summoning different degrees of reading and various moments in history. If, literally, the monument refers to a sculptural or architectural work – or even to a significant part of a landscape or a literary œuvre which became part of history – it is also everything that dedicates, manifests and perpetuates the memory of an event or a person, like the ‘Schlecht’ or ‘Sletto’ – a legendary giant who founded the city of Sélestat – and the ‘Corso fleuri’ – the Spring parade of floats covered with dahlia flowers weaving through the city once per year. The “Sletto & Corso” project questions beliefs generated by monuments, in a time when their meanings get dissolves.

At this occasion, different sites of the city of Sélestat and its immediate surroundings welcome contemporary artworks: in Caveau Sainte-Barbe, a collective exhibition presents artists questioning the monument and its use; Saint-Georges Church and Saint-Quirin chapel receive works inquiring the legacy of the religious ritual; la Poudrière, the Humanist Library, outdoor sites – among others – punctuate a route up to the Haut-Koenigsbourg castle, and illustrate how a monument is not frozen and that its understanding and approach develops itself through time and stratifications.

For the opening, on September Saturday 21, an inaugural parade will be organized, using the ‘Corso fleuri’ municipal floats. Weaving through the streets of Sélestat to the Tanzmatten, this festive procession will celebrate the works which will be then presented at the Biennale.

This 20th edition of the Sélestat Biennial of Contemporary Art is also an opportunity to implement local and cross-border collaborations, including the Sammlung Grässlin in Germany and Frac Alsace with its Clos du Frac.